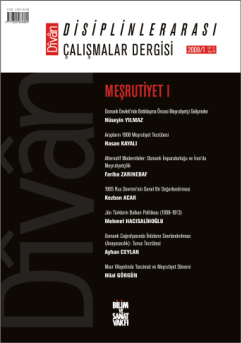 Constitutionalism in the Ottoman Empire before Westernization

This work argues that constitutional structures and ideas existed in the Ottoman Empire before the age of Westernization with no direct influence from the modern constitutionalism developed in Europe. Modern constitutionalism of the nineteenth century was thus as much a continuation of the existing constitutional traditions of the Ottoman experience in government as it was a result of Westernization. The paper examines the topic in three principal areas: First, military, financial and religious institutions that developed into autonomous structures and acted against each other as constitutional checks. Second, compactual agreements between the political authority and social groups such as Hüccet-i Şeriyye and Sened-i İttifak. Third, political and social practices with constitutional import such as consultative assemblies (meclis-i meşveret) that turned into regular decision-making bodies.

Hüseyin YILMAZ
The Arab Experience of the Second Constitutional Era

Perceptions and scholarly examinations of the 1908 Young Turk Revolution, a pivotal event not only for Turkey but for the entire Middle East, carry the mark of nationalisms that have emerged and become entrenched in former Ottoman lands during the last century. This article addresses how the Arabs and the Arab lands of the Ottoman Empire experienced 1908 and the constitutional era that it introduced, a subject that under the weight of nationalist-minded reconstructions of the past tends to get obscured or distorted, if not altogether neglected. It argues that the Arab experience of the Second Constitutional era varied from one region to another as well as among various social groups, and that it was inflected by contingencies external to the Ottoman Arab provinces and also to the Empire.

With few notable exceptions, most historians of the Constitutional era in Iran and Turkey have placed great emphasis on the impact of western thought, particularly the Enlightenment and the ideals of the French revolution on the Iranian and Ottoman constitutional movements. Alternatively, others have emphasized the impact of modernist Islamic and Shii thought, particularly in Iran (Afghani and Abduh). Few scholars have shed much light on the debates on an alternative modernity, the mutual influences of western and eastern/Islamic thoughts and the reception of these ideas among a growing intellectual community in Istanbul, Tabriz, Cairo, etc. This article will focus on the formative years and the intellectual evolution of some key Ottoman and Iranian intellectual figures like Namik Kemal, Taqizade and Mirza Yusuf Mostashar al-Dawlah Tabrizi (1822-1895) based on their writings, memoirs, and newspapers printed in Istanbul and Iran.

Fariba ZARINEBAF
The Russian Revolution of 1905: A Reassessment

The Young Turk movement had the most serious impact on Rumelia where actually the Young Turk revolution itself started. The Committee of Union and Progress (CUP) which came to power after the revolution of 1908 had also its centre in Rumelia until the Balkan Wars of 1912/13. Furthermore, the Macedonian Question and the CUPs political attempts to resolve that question played an important role in the development of the Committees political thinking. After the failure of its policy of creating a union among different ethnic groups in the Balkans by making compromises and negotiations with armed committees and political organisations, the CUP tried to achieve this goal by implementing restrictive laws such as disarming the population in Macedonia and Albania. Not only these attempts failed but also the Ottoman Empire lost its Balkan territories in consequence of the Balkan Wars. Both of these experiences in Macedonia and the trauma caused by the loss of Rumelia played a very important role in the radicalisation of the CUP after 1913. Finally it is important to remember that most of the leading members of the CUP were from Rumelia.

Mehmet HACISALİHOĞLU
The Restriction of Authority in the Ottoman Geography and Constitutionalism: the Tunisian Experience

Tunisia had been under Ottoman rule since 1574, although in practice it was largely an autonomous province. In the middle of the 19th century, increased European economic and political influence and despotism of the Tunisian Bey prompted the British and the French to force the Bey to issue Ahd al-Aman (Security Covenant; September 1857), a civil rights charter modeled on the Ottoman Tanzimat and Islahat Edicts. The Ahd al-Aman granted certain rights and freedoms for non-Muslim subjects. British and French consuls urged Muhammad Bey (1855-1859) to grant a constitution based on the provisions of the Ahd al-Aman. Muhammads successor, Muhammad al-Sadiq Bey (15591882), formally promulgated the constitution in 1861(Kanun ad-Dawla), the first of its kind in Muslim territories. The constitution, consisting of 13 headings and 114 articles, established a constitutional monarchy with the Bey and his ministers responsible to the Grand Council, which consisted of 60 councilors nominated for five years and chosen by the Bey and his ministers from among the ministers, high officials, senior officers and notables. The Grand Council participated in the preparation of laws. The executive power belonged to the Bey and his ministers. The independence of the judicial power was recognized in the constitution. With the eruption of the Ali Ben Ghedhahem revolt in 1864, Sadiq Bey cancelled the 1861 Constitution.

The history of nineteenth-century Egypt has generally been examined not as a province of the Ottoman Empire but as an independent state. Needless to say, the Egypt of the nineteenth century was an Ottoman province and it had an important place in the Tanzimat experince and Constitutional movement. The Proclamation of the Tanzimat Edict in November 1839 was somewhat related to the revolt of the Egyptian governor and following the Proclamation, the Porte made serious efforts on its implementation in Egypt. As an Ottoman province which had the experince of the first majlis, Egypt occupied a special place in developments that led to the constitutional regime. However, it should be emphasised that the primary factor that influenced the constitutional debates in Egypt in the second half of the nineteenth century was an indigenous reaction against foreign intervention caused by heavy foreign debts and the developments that led to the occupation.