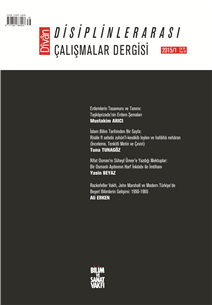 One of the most important steps of moral philosophy in the process of becoming a discipline is to have a terminology of its own. Largely, this process started with Aristotle and continued with its neo-Platonic commentators and this terminology has entered into Islamic world following by the translation of Aristotles Nicomachean and some other Greek works into Arabic. Following al-Kind&#299; and al-F&#257;r&#257;b&#299;s initial efforts Ibn S&#299;n&#257; and Ibn Miskawayh have made a significant contribution to this terminology. These efforts and contributions together with Ghaz&#257;l&#299;s expansion of the concepts especially on the area of virtues and vices in moral philosophy have brought a wealth to the philosophical ethical thought. The expansion of this conceptual vocabulary have been continued by the works on ethical philosophy during the following centuries albeit partially. One of these later contributors is Tashkopr&#299;z&#257;de, the author of Sharkh al-Akhl&#257;q al-Adudiyyah, who has submitted a number of proposals to the relevant terminology in the area of vices. In this article, we will focus on some of the debates on the problem of vice cases in the literature, while referring to the secondary degree virtues and vices in Tashkopr&#299;z&#257;des Sharkh al-Akhl&#257;q al-Adudiyyah with a schematic comparison of Ibn S&#299;n&#257; and Ghaz&#257;l&#299;s conceptual vocabularies.

In this article I examine the work entitled Risala fi sabab zuhur al-kawakib laylan wa khafaiha naharan, which aims to explain why the stars only appear at night. I resolve some uncertainties about the title and authorship of the treatise in light of its manuscript copies and relevant biographical and historical sources. In addition, I determine the time period it was likely composed and suggest that Abu al-Barakat al-Baghdadi was its author. Analyzing the content of the treatise, I show that al-Baghdadi concluded that the reason for the disappearance of the stars during the day was that the strength of the sunlight outshone the light of the stars. Finally, I present a critical edition of the text as well as its Turkish translation.

The debates about language that began during the nineteenth-century era of Ottoman reform (Tanzimat) entered a new stage after the establishment of the Republic of Turkey. These debates first brought about the Alphabet Reform and then resulted in the Language Reform in Turkey. This paper discusses the changing reactions of an Ottoman intellectual, Tosyevizade Doktor Rifat Osman, towards the Alphabet Reform, on the basis of a series of letters he wrote to A. Süheyl Ünver.