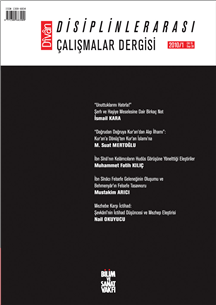 Remember what Youve Forgotten!: Some Notes on the Question of Commentary and Annotation

Classical texts usually emerged and have developed in the form of works on other texts. There has been a variety of reasons for choosing a particular text to work on, including its size, the clarity of its style, its being a textbook, its being easy to memorize, its author, its sacred status and its richness as a source. Other factors on its choice include the scientific outlook of a particular era, intellectual traditions and the relationships between teachers and pupils. The fact that classical texts, including commentaries, annotations, abridgments, were started to be perceived as useless and unscientific, and to be discredited with heavy criticisms is closely related to the loss of self-confidence and self-reliance in the Islamic world. This article first discusses the emergence, logic and organization of different types of classical texts, which are indispensible sources to fully understand Islamic intellectual and cultural heritage. It then examines the criticisms addressed to these works, as well as their implicit and explicit causes and consequences, during the modernization period. It emphasizes the significance of the question of whether it is possible to revisit Islamic sciences without returning to classical commentaries and annotations both practically and psychologically.

İsmail KARA
Being Inspired Directly by the Quran: From Returning to the Quran to the Discourse of Quranic Islam

The discourse of Quranic Islam is an extreme form of some of the demands posed by the (intellectual) movement of returning to the Quran. It has been born out of the efforts by some Muslim intellectuals to overcome the obstacle created by the tradition in the face of the constraints imposed by modern social conditions, of which these intellectuals sought a way out by constructing a modern conception of Islam. They assume that the reason for the backwardness and disintegration of the Muslim World was due to Muslims ignorance of the Quran, and thus propose to return to the Quran by rejecting (partially or entirely) other sources of Islamic worldview and particularly the intellectual tradition that Muslims have produced throughout the history of Islam. Assuming that meaning is intrinsic in the text, the discourse of Quranic Islam focuses only on the Quranic text, thereby completely ignoring the prophetic Sunna, which has in fact a crucial function in term of understanding the Quran and applying it to real-life cases. Other weaknesses of this discourse include the fact that it lacks a sound methodology and any scientific principles, and that it remains superficial in its judgments. Finally, unlike its main objective of decreasing conflicts and disagreements among Muslims, it has increased them instead. A consequence of the above-mentioned lack of methodology, which is produced by the discourse of Quranic Islam that represents the extreme form of the movement of returning to the Quran, is the reading of the Quran freely (without regard to any principles), which in turn results in the fact that certain Quranic verses have been turned into slogans and that a rather individualistic and subjective/relativized conception of religion has emerged. This implies, moreover, a chaotic situation where Islam is reduced to a set of theoretical principles devoid of any practical application, which furthers divisions among Muslims hurting the idea of a unified ummah. Finally, with all these features, the discourse of Quranic Islam implies, though not directly aims at, a particular understanding of religion that begs the question of whether or not it in fact serves the secularization of religion.

This article aims to discuss Avicenna&#8217;s critique of theologians&#8217; (mutakallim&#363;n) view of hudûth (origination). It first describes theologians&#8217; theory of origination, emphasizing its aspects that his criticism targeted. These aspects include the concept of temporal origination, which forms the basis of the argument for God&#8217;s existence, God&#8217;s eternity as its most important attribute, and the efforts to solve the problem of attributes in such a way as not to nullify the idea of the &#8216;originated universe&#8217;. Avicenna&#8217;s critique of theologians&#8217; view of origination can be summed up in four points. First, the idea of the universe as originated does not entail logical imperative and thus need to be rejected, because it implies a conception of time based on the problem of infinite regress. Second, the idea of the originated universe by itself does not necessarily lead to the idea of an originator. Third, it is impossible to think of the originator&#8217;s subsequent intervention into the universe within the framework of the idea of the universe as originated. Finally, the idea of origination makes God dysfunctional by deferring His creation.

Bahmanyâr ibn Marzubân (d. 458/1066) is one of Avicennas most famous first generation students. Bahmanyâr spent many years studying with Avicenna and participated in discussions with him on difficult philosophical issues. Bahmanyârs most important contribution was his role in transmitting the Avicennian philosophy to next generations. His student Lawkarî continued Avicennian school, which later influenced not only philosophy but also theology and Sufism in the Ottoman and Iranian milieus. His most important work is al-Tahsîl, which summarizes the Peripatetic philosophy as espoused Avicenna in his al-Shifâ, al-Najât, al-Ishârat wal-tanbîhât, Dânesnâma-yi Alâî. It presents a good discussion of Avicennas opinions on logic, metaphysics and physics. Bahmanyâr compiled his al-Tahsîl on the model of Avicennas Dânesnâma-yi Alâî. Bahmanyâr can thus be seen as the interpreter, compiler and transmitter of Avicennas philosophy. This article first gives information on his life and then discusses his understanding of theoretical philosophy and metaphysics and identifies the points he differs from Avicenna focusing on his al-Tahsîl.

Yamani scholar al-Shawk&#257;n&#299;&#8217;s view of Islamic legal history was shaped by his understanding of ijtihâd-imitation (taqlîd) and affiliation (intisâb) with a school of law. He fiercely opposed to the idea of &#8216;closing the gate of ijtihâd&#8217; and criticized imitation and legal affiliation by calling them reprehensible innovations. This article discusses al-Shawkânî&#8217;s view of Islamic legal history that he formed on the basis of his understanding of the concepts of ijtihâd and affiliation with a legal school. It will also briefly touch upon the dominant legal perception of scholars and its critique in the pre-Shawkânî period before discussing his understanding of ijtihâd, his opposition to legal imitation and his argumentation in this question. It will then examine his critique of Islamic legal history focusing on his view of the madhabs that had dominated much of this history. Finally, it will discuss his view of the leaders of legal schools, of legal affiliation, the emergence of madhabs and their expansion as well his critique of the followers of legal schools, which together formed the basis of his overall critique of these schools.