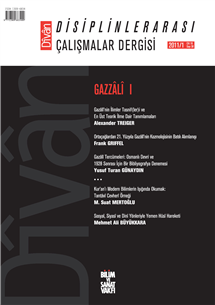 The present study offers a comprehensive survey of al-Ghazalis classifications of the sciences and descriptions of the highest theoretical science, called the science of unveiling in the Re-vival of the Religious Sciences and the science of the cognition of God in the Jewels of the Quran. The study shows that this theoretical science includes four major components, dealing with (1) God, (2) cosmology, (3) prophetology, angelology, and religious psychology, and (4) eschatology (with a fifth component, principles of Quranic exegesis, sometimes added to the list). Al-Ghazalis science of unveiling is, therefore, primarily a theological discipline. It is, however, superior to kalam in that it does not result from ratiocination, but is revealed through Divine Illumination to prophets and saints (awliya) who have purified their hearts with as-cetic practice. Another key difference between the science of unveiling and kalam, according to al-Ghazali, is that the former operates on the level of True Knowledge, whereas the latter only defends the common folks beliefs from the onslaught of heresies, without providing ac-cess to True Knowledge. Since the science of unveiling has a pronounced Avicennian compo-nent (more fully documented in the authors other studies), it is a kind of Avicennian-based esoteric theology. Finally, al-Ghazalis classifications of the sciences offer a number of inter-esting insights into the general structure of al-Ghazalis thought, also discussed in the present study.

Among subjects of Islamic theology, the cosmology of al-Ghazali has received much attention in the West. Scholars in the Renaissance were familiar with al-Ghazalis critique of philosophi-cal theories of causality in the 17th discussion of his Incoherence of the Philosophers (Tahafut al-falasifa). During the first half of the 19th century, when the Western academic study of Is-lamic theology began, scholars came to the conclusion that in this chapter, al-Ghazali denied the existence of causal connections. That position was connected to an apparent lack of pro-gress in scientific research in the Muslim countries. Ernest Renan, for instances, understood al-Ghazali critique of philosophical theories of causality as an anti-rationalist, mystically inspired opposition to the natural sciences. This view became immensely influential among Western in-tellectuals and is still widely held. When al-Ghazalis Niche of Lights (Mishkat al-anwar) be-came available during the first decades of the 20th century, Western interpreters understood that at least here al-Ghazali does not deny the existence of causal connections. During much of the 20th century, Western scholars favored an explanation that ascribes two different sets of teaching to al-Ghazali, one esoteric and one exoteric. The last decades of the 20th century saw two very different interpretations of al-Ghazalis cosmology in the works of Michael E. Mar-mura and Richard M. Frank. Both rejected that al-Ghazali held exoteric and esoteric views. Marmura explained causal connections as direct actions of God and Frank regarded them as expressions of secondary causality. Their contributions led to the understanding in the West that al-Ghazali did not deny the existence of causal connections and cannot be regarded as an opponent of the natural sciences in Islam.

Frank GRIFFEL
Al-Ghazali Translations in Turkish: A Bibliographical Sketch of the Ottoman and Post-1928 Periods

This article contains the bibliographical references of translations from al-Ghazali (1058-1111) in Ottoman and Modern Turkish. It covers two major periods, including the Ottoman era and the Post-Alphabet Revolution era. An historical survey of these translations shows that the translations of al-Ghazali s two most popular books, Ihya al-ulum al-din and Kimya-e Saadat, were never fully published in the Ottoman period whereas his Tahafut al-falasifa was first translated during the Republican era. On the other hand, a pamphlet known as the translation of al-Ghazalis Ayyuha al-walad and published several times during the Ottoman period, is actu-ally Sulaiman ibn Jaras catechistic book, which has also been simplified and published several times during the Republican era. The present article also contains information on the first trans-lation from al-Ghazali after 1928, the first publication dates of his works in Turkish and their translators. Finally it gives a list of the published translations from al-Ghazali in alphabetical order.

Yusuf Turan GÜNAYDIN
Reading the Quran in Light of the Modern Science: The Case of Tantawi Jawhari

The category of scientific commentary, which is defined as the interpretation of the Quran in light of the existing scientific concepts and knowledge, particularly of natural sciences, is an old tradition whose roots go back to the Abbasid period. This article will first present an over-view of the historical development of the scientific commentary of the Quran, and then exam-ine the perspective of the Egyptian intellectual Tantawi Jawhari (d. 1940), who is considered to be the founder and one of the most important representatives of this approach to the Quran in the modern period. Interpreting the Quran in light of modern scientific developments in his al-Jawahir and other works, Jawharis project aims to disprove the idea of a conflict between Is-lam and science on the one hand, and to draw Muslims attention to modern sciences, on the other.

Suat MERTOĞLU
Huthi Movement in Yemen with its Social, Political and Religious Aspects

This study aims to examine Yemen Huthi movement, which has been in the state of armed in-surgency against Yemeni government since 2004, with its historical, social, political and reli-gious aspects. On this occasion, Yemen deserves to be subjected to an up-to-date analysis from socio-political and socio-religious perspectives. This analysis does not only open a door to identifying the Zaydiyya-rooted Huthi movement, but also more specifically reveals other reli-gious trends with their social networks and political connections in Yemen which has a complex social and religious structure.